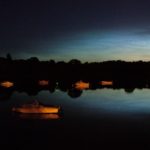 The Paradox of Nature
https://www.etymonline.com/word/nature

There is a long standing common misuse of the word Nature as the name of some sort of entity, as in pointing at the outside world and calling it “Nature” like it is a thing.
This is an unhelpful misunderstanding of the nature of the word “nature” and its use.
It started in the late 14th century when we still thought of the wilderness as a chaotic untamed place with no self-aware creatures, communities, social-status, or tool-users.
We now realise that we are not alone in being sentient, living in ordered communities with ranks and status, and importantly in feeling emotions.

The nature of something is the innate properties of a thing without external influence, however it is also in the nature of many things to exert influence on the surroundings.
It is as equally natural for atoms to attract other atoms and create elements, as it is for a bird to collect leaves, twigs and animal fur to make a nest, or a human to make horrible steel and concrete ant-hills.

Many people perceive the words nature and natural meaning a vague “anything not human-made”, thus ignoring the fact that Humans are a natural product of this planet.

For comparison;
An alien visitor to the planet Earth would obviously not be human, so any buildings or technology it makes would have to be part of “Nature” as the are not “man-made”.
Even if the visitor made the human technology and buildings look like medieval hovels by comparison, would you still say that is Nature or natural ?
Most people would see it as unnatural, but I would say;
Yes it is natural for the visitor if that is what they tend to do, but not if it is something they would never normally do.

Human life evolved on the planet Earth, so is a natural part of life here.
We are part of the nature of things, not separate or outside.
Many apes shape their surroundings to create shelter, and do things beyond what is natural for the normal process of the plants they have used.
Where is this line in the sand where using and shaping the environment goes from being natural to unnatural ?
There was no point that we evolved beyond the Earth or stopped being a product of it, so we must accept that we are natural no-tail monkeys, and everything we do that is expected or normal is “natural for the human race”.

The nature of one thing is often at odds with the nature of another. That is the nature of the Universe because it is in motion and ever changing.
Equilibrium or the balance of nature is a cosy myth, because that would actually indicate a point of stasis with no change.
We cannot stop the arrow of time and the entropy of the Universe, so it will continue changing with or without us, as it did millions of years ago and will millions of years in the future.

Although nature is not a personification or entity like a Gaia mother figure, it is helpful to think of the planet and beyond in a holistic manner due to “the fundamental interconnectedness of everything”.
Understand that every action has a reaction, and that every change has repercussions, maybe directly for you or for someone or something else, but always indirectly for you if you live within the same framework.

Ageing techno-hippy armed with a radio show and not afraid to use it.

This site uses Akismet to reduce spam. Learn how your comment data is processed.